My bridal shower was everything and more! I had a Beverly Hills themed bridal shower hosted by my mom and aunt and it was so sweet. I told them the theme, they hired my amazing wedding planner and the rest is history.

I want to shout out of my vendors now before I get into the details of everything because so many wonderful people helped make this a memorable event for me.

All of that out of the way, lets get into my full bridal shower recap.

My family came and got me which was fun because we got to all ride to the venue together. These are really special moments for us and had they not have hired a planner we wouldn’t have been able to enjoy something as simple as riding over to my bridal shower together.

When we pulled up to the venue, my planner came and got me, which was nice because there were like 5-7 other parties going on and it was pretty busy at this point I was ready, feeling good, feeling confident, feeling beautiful, ready to experience the bride side of things.

My initial reaction when I walked in was excitement, I of course had no idea what to expect, but my expectation was definitely met and then some. Seeing my beautiful sister and Matron of Honor and all of my girls who were there first was comforting especially because I almost felt like I didn’t know what to do. This moment has been so long coming, I feel like I forgot how to just be and just enjoy the moment.

How I Chose My Theme?

My bridal shower theme was Beverly Hills Hotel. Why? I jut wanted something I hadn’t seen before for a shower. There are a lot of “traditional” and/or common themes, but with my background in events, I had a vision and knew this would look good aesthetically.

The colors were green, white and pink, with gold and some yellow. I wanted long tables because it always feels like family style and it was great for photos the way the room was setup. The linens were white with pink napkins, a leaf underneath and a white plate on top which was perfect. Each place setting had a personal size bottle of rose with a custom label that had a name on it and a green and white striped ribbon which was so cute. My amazing planner have different chairs brought in for me because she is the best, but also aesthetics; the white chairs really made the room bright and beautiful.

My flowers were so graciously done for me as a gift from our family friend and they were gorgeous. Hydrangeas are so full and pretty and the blooms went well with the over sized leaf. The colors were spot on and really went well with the rest of the bridal shower decor.

The highlight of the room was the gorgeous moss wall adorned with Beverly Hills and the pretty balloon arch that went so well with the room in general. The gold balloons were perfectly complimented by the metallic curtains and it really brought the room together.

The food was catered by the Proud Bird, it was brunch of course; nutella french toast, eggs, sausage, bacon, potatoes assorted fruit, and pastries and all I know is everyone had seconds so I know the food was good to others and not just me. We did one round of mimosas, but secretly got more + an extra glass of bubbly for a toast which was nice.

Food plays just as much of a role in my entire experience as everything else did, so I was thrilled after eating everything.

The desserts for my bridal shower were so good and definitely perfect for anyone that had a sweet tooth. I had mini marble cupcakes from Hansen’s; Hansen’s is a staple for our family and a well known bakery so it only made sense. My cookies were from Diddy Riese which is another popular well known spot near UCLA known for their cookies and cookie ice cream sandwiches. Lastly I had macarons/macaroons; the green flavor was earl grey, the pink was rose and the like tan was madagascar vanilla bean. It all looked so cute together.

From there and while still eating we began to play games. For my bridal shower, I wanted games that would make people laugh, be interactive, but not feel so stuffy or cheesy. I didn’t want purse bingo or the toilet paper game, so I after looking at Pinterest I came up with 3 games that would be fun and get people thinking.

The first game of my bridal shower was ‘Would Jaz Rather’. To me it’s like a spin on who knows the bride best, but without the anxiety of random guessing. Typically the game is a sheet with questions and a blank line and you fill in what you think; no group interaction at all. My version, had the options read out loud and then everyone wrote down their answer; this way EVERYONE had a 50/50 chance. Some answers were both which was a way to give a bonus point.

Some of the options were: would jaz rather, wear braids or wear a ponytail? Eat sushi or eat brunch? Go out or stay in? Since it was read out loud people were talking, I was chiming in and it just made it fun for everyone in my opinion.

The second game of my bridal shower was Wifey Taboo. If you’ve played Taboo before you know it’s about explaining a thing, person or place without saying the words that would give it away. So all rules were the same except all of the people were celeb wives. Young, old, sports, reality TV and the like. We split ourselves into 1’s and 2’s and and went through each stack of cards which was fun. There wasn’t a winner for this one, but it was so fun and interactive. I like to think I took away a lot of what could/would be said so the girls had to get creative with their descriptions. It was a good time!

The last game of my bridal shower was Pass the Bouquet; think musical chairs + hot potato but with a bouquet. So everyone sat down, one person started with the bouquet and once the music started you had to pass it until the music stopped. Watching people toss, throw and the bouquet was HILARIOUS! I love a good competition and watching everyone try to move the flowers as fast as possible made for a really good game. Plus we got to get outside and enjoy some sunshine.

My outfit for my shower was important to me. I wanted to feel sexy, glam and luxe overall so I chose the Selena Dress from House of CB which was a great choice (aside from the fact that the seam popped in front). Most people that didn’t know the brand, thought I had the dress custom made which is a huge compliment considering the fit and style. It did fit very well, the material was nice and thick and the corset kept me snatched. It’s for sure a show stopper dress.

My shoes were my Chartreuse Louboutins; originally they were only going to be my wedding shoes. Given the fact that I plan to wear them beyond then, I felt like my bridal shower was the perfect place to bring them out. I love a good satin on satin vibe, so they went beautifully with my dress and my bridal shower decor.

My Fiance, My Flowers + A Collaboration?

The “rules” are your fiance is supposed to bring you flowers toward the end of your shower and mine did just that. He surprised me though 1. with his outfit which was from this amazing African place by our house called Katula and 2. with the fact that he got me flowers from Venus Et Fleur. I feel like I need to give ya’ll the background on the flowers though.

So ORIGINALLY a flower brand similar, to Venus Et Fleur reached out to me about doing a collab and I thought PERFECT! So we went back and fourth, I shared my ideas, mentioned my bridal shower, etc. All was good until we got to picking the product and contract signing. When I saw how much rights and usage the brand wanted for my photos and what they planned to do with them, I was immediately back to negotiating because the product value didn’t match the distance my photo would go especially without compensation.

I countered for a larger product or told them I would have to charge my rate and well beyond because the product did not meet the same level of use the brand was seeking. The brand never responded so I let it go.

So how did we get to Venus Et Fleur? I was telling my fiance what happened and because he isn’t a huge flower guy, he didn’t see what the fuss was over these flowers. Then I started explaining to him what preserved roses were, what the popular brands were, etc. We basically spent well over 2 hours just talking flowers. At the end of the convo I was like “I’m not really pressed, do what you want” and left it there. My fiance is really good at tricking me, so by the next day he had already bought AND picked up the flowers from Venus Et Fleur and hid them. As my bridal shower got closer, he was like “What about edible arrangements, chocolate covered strawberries?” I said cool and that was that.

LONG STORY SHORT, he walks into my shower with this huge black bag and I knew it was the flowers. At that point I was like “when, how, and where are my strawberries?!” but none the less, he basically felt like the brand tried to played me and wanted to treat me. Since he doesn’t buy flowers regularly because they die, he felt like these flowers, which last a year would be a better buy. Since they last long he doesn’t have to buy me flowers for A GOOD WHILE hahaha!

My favorite thing about the roses, aside from the fact that they are black is they smell SO good, every morning, I literally stop and smell my roses before I leave and when I come home.

Lastly my bridal shower favors were candles which smell SO good and was an addition to the personal rose bottles that could be taken or drank there.

OVERALL my bridal shower was perfect and so me. My aunt and mom did a beautiful job and came together nicely with my planner and I feel so blessed. Also their speeches were so cute.

You may also enjoy: 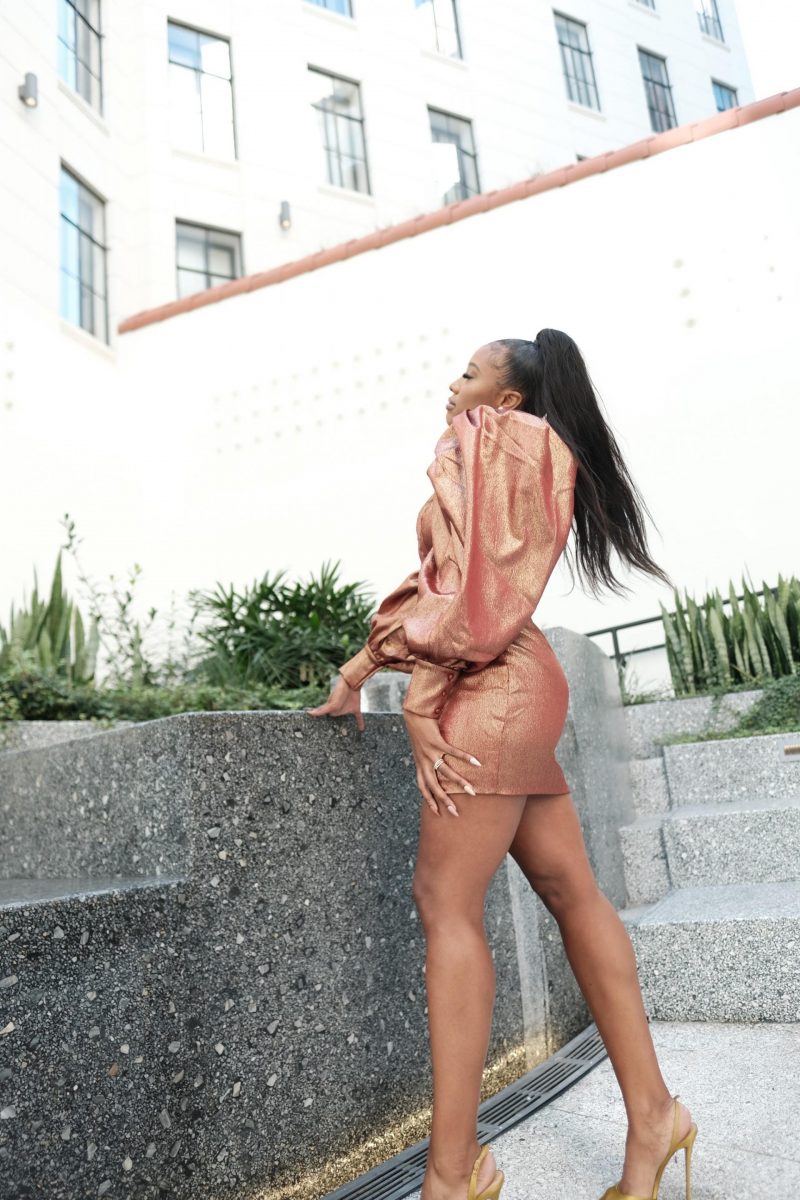